Home Budget What does $720,000 get for a house in Fort McMurray?
Back Home

[quote]According to the Royal LePage House Price Survey, the standard two-storey homes in Fort McMurray sold on average for $720,000.[/quote]

Fort McMurray is considered the heart of one of Alberta’s (and Canada’s) major hubs of oil production, located near the Athabasca Oil Sands. Besides the oil sands, the economy also relies on natural gas and oil pipelines, forestry and tourism. The two largest oil sand mining companies are Syncrude and Suncor Energy. 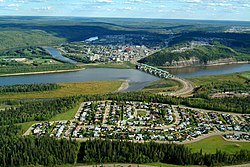 I understand the remoteness of the community and the cost of living but when a house that has 3 bedrooms and 2 baths is $720,000 how does a family get ahead?

The importance of building a credit history and credit score