Home Invest Is Facebook desperate for money?
Back Home

Facebook Inc.’s stock, which has already lost $25 billion in value since its public debut, would have to drop another 20 percent for its valuation to match other companies that do business over the Internet.

In a sign that Facebook is in trouble here is a photo of company founder Mark Zuckerberg taking money out of the ATM.

I don’t want to say the company is in trouble but their IPO gave Facebook a higher multiple than 99 percent of the Standard Poor’s 500 Index.

What they have done to immediately show increased revenue (like LinkedIn), is to start charging page owners  to have their Facebook pages promoted to their fans’ newsfeeds.

Here is an example of what they are doing: 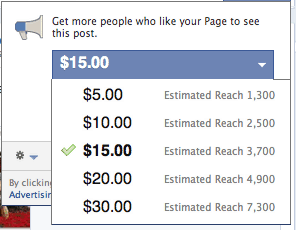 Facebook will hide updates to most fans. Yet, for $30, you can have a status into your fans’ newsfeeds.

I like this idea as a shareholder but I don’t own any shares and I hate it!

Can’t they think of any other idea?

This is why I don’t invest in companies that do not pay dividends – they do not have a long standing business and understandable business. They seem to change ideas constantly as to what they want to do.

Finding a New Job When You`re Already in One

Ways To Save Money When Importing

Deciding If All Debt is Bad Debt

What to Consider When Buying US Property?

Is Investing in Online Casinos a Good Idea?