The ridiculous private jet of CEO of Abercrombie & Fitch

I love to see stories of CEOs with bizarre demands. 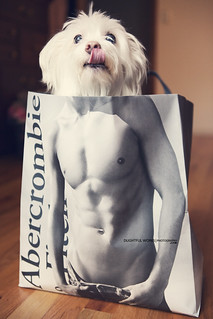 I can’t help to think that I have helped fund some of these crazy demands (I like their button down tops and they have nice shirts).

Here are some of the highlights of the Abercrombie & Fitch private corporate jet:

* Pre-flight, workers are directed to mount a fingerprint hunt throughout the Gulfstream G550.

* In the rear lavatory, “washcloths are to be tri-folded,” while toilet paper is not to be exposed (nor should its “end square” be folded).

* A 13-title magazine assortment should be available in a credenza, with all inserts removed.

* Seat belts “should be folded neatly into the seat backing. The buckles should have a ten inch space between them and should be free of fingerprints or marks.

* “Clean shaven” male staffers should “spritz their uniforms with Abercrombie & Fitch 41 cologne” and adhere to a uniform that includes boxer briefs, flip flops, a polo shirt, and gloves. When wearing a winter coat (but only when the temperature is 50 or below), crew member must “Zip the jacket up to the fourth button from the bottom. The lowest button should be left undone, but the next three buttons up should be fastened.” Also, “Flip up the collar on the coat.”

* The jeans of crew members “should sit at the hips. The belt is flipped over at the buckle.” As for shirts, they “should be tucked in at the front between the front two belt loops and none of the buttons should be fastened.” That’s right, the male staffers–usually wannabe models and actors–do not need to worry about fussing with tricky shirt buttons.

* When the Jeffries-Smith canines (Ruby, Trouble, and Sammy) fly on the $50 million aircraft, they have assigned seats. “When Ruby and Trouble travel, Ruby will sit opposite Michael in the cabin, in Sammy’s seat. When Sammy travels, Ruby will sit in Trouble’s seat.”

* When Jeffries or Smith make a request, crew members should “respond by saying, ‘No problem.’ This should be used in place of phrases like, ‘Sure’ or ‘Just a minute.’”

* In a section entitled“Matthew’s Tea Service,” workers are advised that Smith “drinks Assam tea in the morning and Darjeeling tea after 2:00 pm.”

* In the introduction to the manual’s “Meal Service” requirements, a steward is advised that they “should let Matthew know when to sit down for meal service, and may need to give cues as to the pace of the meal.” Additionally, “If there ends up not being enough time to comfortably serve the dessert or cheese course, do not try to squeeze in the course.”

* When setting tables, staffers should have a ruler handy.

* For return flights, the song “Take Me Home” should play when passengers enter the cabin. Staff are also to play a specific track from a CD compiled by Gilly Hicks, an Abercrombie & Fitch offshoot brand.

According to Bloomberg, Jeffries’s employment contract, which expires in 2014, could “award him as much as $105.6 million if control of the company changes hands and he loses his job.”

Courtesy of the Smoking Gun

Financial literacy - Why is it so important

Analytics That All Business Owners Need To Take Into Consideration